What is British National Corpus?

The British National Corpus (BNC) is a 100-million-word collection of samples of a written and spoken language of British English from the later part of the 20th century.

The BNC consists of the bigger written part (90 %, e.g. newspapers, academic books, letters, essays, etc.) and the smaller spoken part (remaining 10 %, e.g. informal conversations, radio shows, etc.). The spoken part is also available in the audio format, and it can be played directly in the Sketch Engine interface.

The corpus texts contain a large amount of information and thus each user can use many search criteria as a time of publication, region captured spoken text, type of media and text domain, or the David Lee’s classification – a detailed genre specification. The full list of genres of this classification is here.

See the charts and more information about texts in the British National Corpus.

Distribution of parts of speech

Further information about texts in the corpus

A complete set of tools is available to work with the British National Corpus to generate:

How to reference Sketch Engine

Data from the BNCOur policy is to request that citations from the British National Corpus should include the text identifier (a 3 letter code) and sentence number. A suitable form of words for crediting the BNC would be:

Sketch Engine offers a range of tools to work with this British English Corpus. 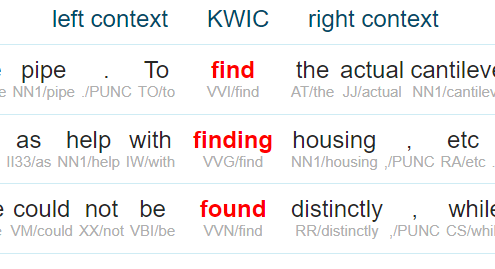