The OPUS2 parallel corpus is a set of text corpora with aligned sentences which allow searching and analysing translations between all the languages.

The parallel corpora were collected, prepared and aligned by Joerg Tiedermann in the OPUS project (see http://opus.lingfil.uu.se/). We are most grateful to him for his great work and co-operation. The data were processed by Sketch Engine using a range of lemmatisers, part-of-speech taggers and sketch grammars.

The OPUS2 corpora are the second version with m:n the alignment, which allows for just one corpus per language.

This parallel corpus can be searched and analysed monolingually or multilingually using all available tools in Sketch Engine: concordances, collocations, word lists and more.

All other languages without tagging tools were just tokenized using Universal tokenizer built by Jan Pomikalek and inspired by Laurent Pointal’s TreeTagger wrapper.

The Montenegrin-English parallel corpus consists of movie subtitles. The total number of tokens is 1.07 million. The original data a more information is available on the original website http://opus.nlpl.eu/MontenegrinSubs.php Preprocessing of data was carried out by Nikola Ljubešić.

The table shows the number of aligned tokens (in millions) for each pair of languages. Click to enlarge. 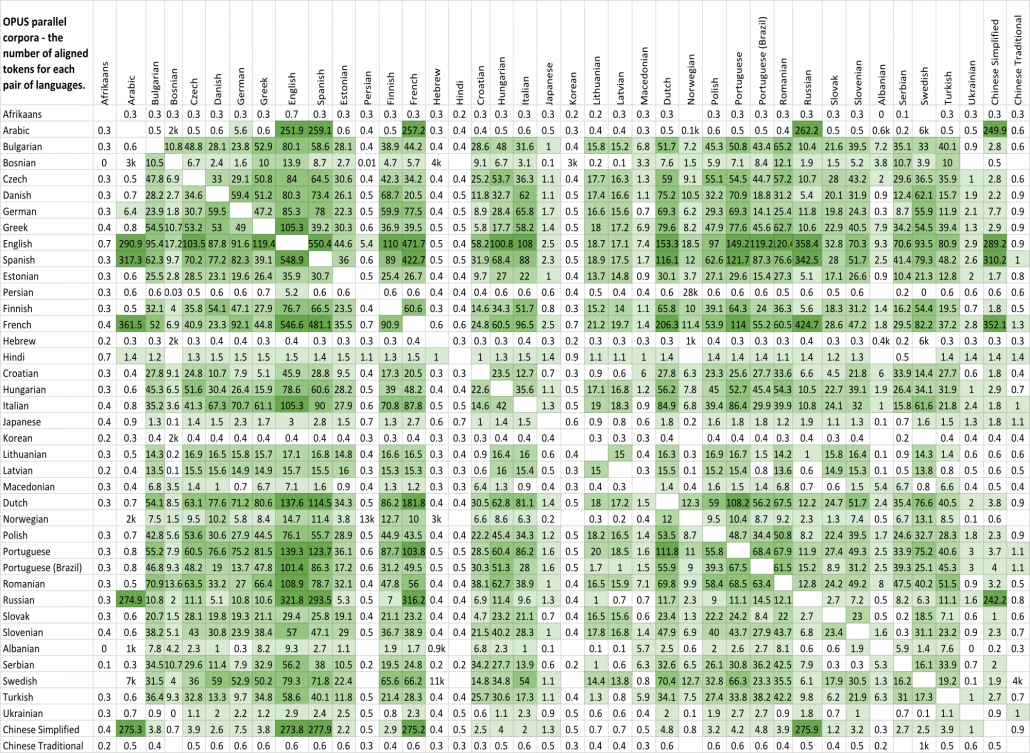 Sketch Engine offers a range of tools to work with the OPUS parallel corpora.

Create your own multilingual or parallel corpora in Sketch Engine.

Please cite the following article if you use any part of the corpus in your own work:

Jörg Tiedemann, 2012, Parallel Data, Tools and Interfaces in OPUS. [pdf] In Proceedings of the 8th International Conference on Language Resources and Evaluation (LREC’2012).

Eur-Lex judgments corpus – judgments of the Court of Justice